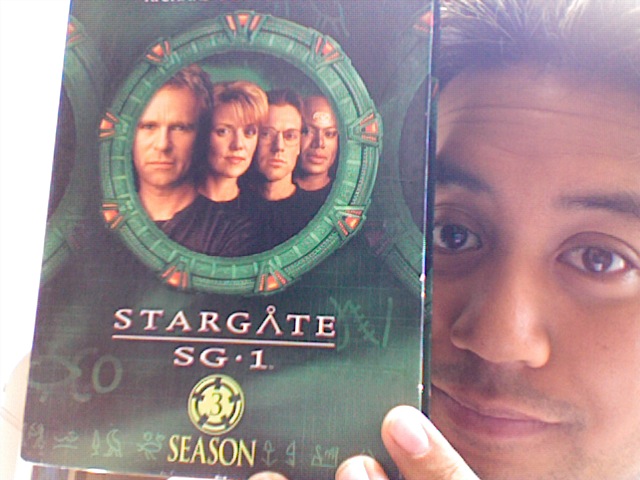 There wasn’t much expansion in this season. There are a few new tidbits that may come up later, but nothing on the scale of last season. The theme for this season was definitely to close off most (if not all) of the open loops from the last season and previous that I was annoyed about. Hathor’s dealt with, the “Destroyer of Worlds” lady is dealt with, Selmak the Goa’uld who’s like Satan gets blown up, Skaara’s saved from the Goa’uld, the rogue SG team gets captured, they deal with Daniel’s wife and sort of kind of deal with the child she and Apophis had. Oh, yeah, Apophis is back.

Production values have gone up again a little bit. It was most noticeable in the season opener finishing off last season’s cliffhanger which had some of the best action thus far including General Hammond pulling a Han Solo style yell while finally going through the stargate. There were a couple instances of computer-generated stargate being used instead of a prop one. I’d almost rather they just have the gate offscreen in those cases.

Everyone but Teal’c got a “this episode’s about just me!” show this year. In fact, Daniel, O’Neill, and Carter each got two. Not sure if they’re freezing Teal’c out or if he’s just content to be the muscle only this season, but he does a really good job with the fighting and blasting, so I’m not complaining. There was also a lot less Hammond in this season. On a different note, there was also decidedly less of the normal “Chevron 5 Encoded” guy– the balding one with the glasses, and Dr. Fraiser now seems to get a regular cast credit.

The opening has been the same since the first episode though on the season finale this season they went for a more cinematic opener… in fact, I think they may have been trying to mimic the style of the movie’s opening credits. I liked the TV-style credits where they show the cast member while the actor’s name comes up, so hopefully that’s just something they were trying.

The good stuff:
Much better episode setups: “Learning Curve” had a race that essentially lobotomized their children. “Rules of Engagement” had a planetfull of soldiers of Apophis training on autopilot expecting his return. “New Ground” had a full-on religiously motivated geopolitical war over the Stargate and the origin of the people. The things I liked about these episodes were that the problems in these episodes were much bigger than something than something that was fixable by a team running in blasting. The New Ground episode, though, was the only one I thought they ended well — i.e. the war is still happening on the planet, they didn’t miraculously fix that. The ending of “Learning Curve” is forgivable to me because the setup was kinda contrived. I just liked the conflict of “this is how our culture has persisted!” philosophical problem. Trek people would point out how having the Prime Directive would negate this, but let’s not talk about how often that gets violated on Trek. “Rules of Engagement” had a very literal Deus ex Machina ending where the team projects images of Apophis dying to shock the soldiers into realizing their war is over. Coincidentally less than 3 episodes later Apophis is actually back AGAIN.

Religion is bad! There were three episodes where overzealous religion caused problems for the team. First in “Seth” a Goa’uld that has been hiding out on earth forming religious suicide cults gets dispatched. This episode was more like a “ripped from the headlines” Law and Order or CSI or some other procedural cop show. “Demons” had the dark-ages style Christians (apparently stolen from earth) with witch trials and everything. Also the aforementioned “New Ground” had two cultures in a war over if the planet’s inhabitants were put there by a god or came through the stargate. You could also argue that the “Jolinar’s Memories” episodes were in Hell and they destroyed Hell and Satan (aka the Goa’uld Sokar). Even Zen Buddhism gets debunked as not people reaching enlightenment but non-corporeal spirits that can hurl lightning and light fires in the episode “Maternal Instinct.” General takeaway? Religion causes people to act irrationally. Atheists on the writing staff? Hmm?

The use of older people to play older people. Kind of a weird thing for me, but I really disliked the 2nd season episode where Ma’chello was played by a young guy in old-man makeup. How hard would it have been to get an older guy to play that part, he was bedridden for 90% of the episode, geez. Daniel’s grandfather acted very well in “Crystal Skull” without needing a fake nose, brow ridge, and other appliques.

Flash… ah-ah… Great guest-role in Deadman Switch by Sam “Flash Gordon” Jones as a pretty badass bounty hunter. I hope he comes back.

The bad:
I never noticed this but they changed the name of Daniel’s wife. I just rewatched the movie last weekend and Daniel’s wife is Sha’uri in the movie. In the series it’s Sha’re. Seems like an unnecessary detail to change. Especially since she’s dead now. Doh. Oh, and one episode later Daniel’s already hooking up with an alien lady who’s being quarantined who turns out to be the Destroyer of Worlds. Double-doh.

“Shades of Grey” episode where Jack gets kicked off the team, joins Maybourne and the rogue SG team only to sell them out when the Asgard show up because he was a spy. Kinda saw it coming in the first five minutes.

Speaking of Maybourne. They keep changing if he’s a goodguy or a badguy. If I take the approach that he likes to play both sides of the field, he’s schizophrenic or hosts a Goa’uld. Either way I don’t like him as a recurring minor character and he needs to get firmed up some more or be dealt with and gone.

Apophis is back. All these other system lords and he’s back again. Maybe we can get a team up later, otherwise he’s becoming annoying. For someone who’s not a god he’s awful good at the immortality stuff.

Another Asian bites it. In “Maternal Instinct” the monk/guide/janitor gets a staff blast. In the Re’tu episode last season the normal SG-1 team splits up to storm the base and is augmented by another team; who’s the first guy to die? The Asian one.

Trial episode: “Pretense” has Skaara and his Goa’uld host vying for control of the body while the techno-snob Tollan hear arguments from a sneering Goa’uld attorney and Daniel and O’Neill about the difference between sentience and property. I hate courtroom drama!

Finale episode “Nemesis” and not just because of the newer cinematic-style opening. I didn’t like this episode because the badguys are AI-driven “Replicators” that manifest as bug-like creatures and swarm over the ship threatening to crash land it to Earth and overrun it. Let’s look at that closer, an hive-mind artificial intelligence that can repair themselves and want to take over the Earth. Ripping off Star Trek TNG’s Best of Both Worlds as the season finale AGAIN.

The Cheesy:
Every world’s a forest world! At least early in the season, it seemed like there were no desert, ice, rocky, or any other planets.

Dom Deluise as Urgo. OK, so he adlibbed all his lines and is related to Peter Deluise (one of the major writers). Still, this episode was pure cheese.

I have high hopes for season 4. They have mostly wrapped up the stuff in season 2 and with production values still increasing, it should look and feel a lot better. I think it’s time for a nice interplanetary war against the Goa’uld, but we’ll see if they pick up that thread.