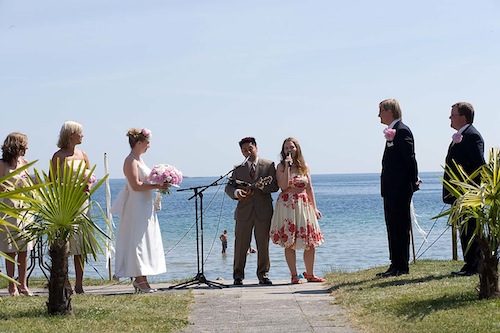 On the occasion of our Eighth Wedding Anniversary I thought I’d disperse some facts about our marriage.

Our wedding date was October 7 2001 which can be abbreviated palindromically as 10/7/01.

All three of Julie’s bridesmaids have gotten married and we’ve been to all of their weddings. Groomsmen, er, not so much.

I attempted to learn ukulele with the intention of randomly serenading Julie with the ukulele on our Hawaiian honeymoon but didn’t learn it in time. Since then I’ve learned a bunch of songs and recorded some for the site as well as played ukulele and sang with Julie at two weddings. Weddings by the ocean. With our eyes closed.

Julie and I met on the first day of college (awww) But she had a boyfriend at the time (oooooh) So I carried a torch and asked her out to a new year’s eve ballroom class & dance (awww) And at the time I didn’t know she was broken up with her boyfriend (oooooh) So I planned to surprise her on Valentine’s Day and pass anonymous notes in the meantime (awww) But Julie’s smart and I’m transparent and she called me on it (hahahahaha) So I played dumb initially but then spilled it out and we went on a dinner and movie date (awwww) The movie was Baz Luhrmann’s “William Shakespeare’s Romeo+Juliet” (hahahaha… huh?)

The 8th anniversary traditional and modern gifts are bronze and lace, respectively, so I guess I’ll be looking for a shields & spears motif at Victoria’s Secret.

We got married at the Monterey Bay Aquarium in front of the kelp forest. We joked the officiant could be the diver in the tank but it wasn’t given to us as an option.

The most easily verifiable fact is that I love my wife Julie very much.