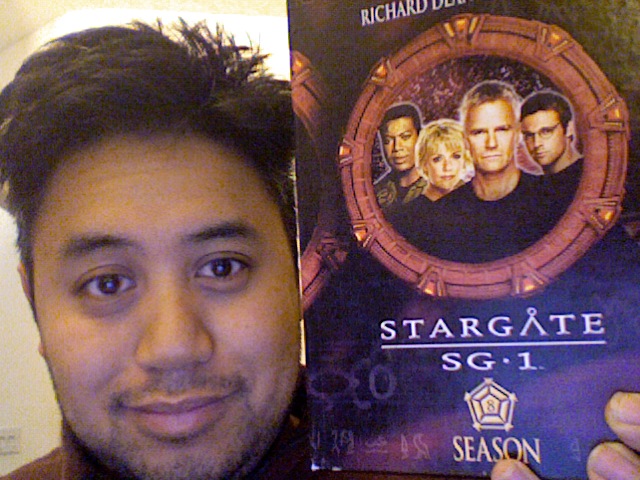 Been a little while since I’ve updated these. Season 8 took a bit longer to watch and I think it’s because it felt less enjoyable on the whole. There were some glimmers so let’s look into it and see what we got.

On the whole, this season kept the normal cast, but they decided to involve the viewers in all the base bureaucracy and “real world” politics and happenings and less on going through the stargate. In fact there was a run of three or so episodes that were totally stargate free. The episodes wandered all over the map this season but they pulled on the reins pretty hard towards the end to wrap it up in a reasonably good way.

As the season premieres with New Order, the civilian woman with whom they replaced General Hammond quit pretty quickly. She also completely changed her hair and appearance (ha ha)… something tells me the actor quit, and they felt they needed to write her out. After a little hi-hi by the Asgard, O’Neill is woken up and apparently they’re being again plagued by the Replicators who have taken Carter and it turns out this batch of Replicators is led by “Fifth” who was the human-form one that got tricked by SG-1 and mostly Carter to get stuck in a time-dilation bubble. O’Neill figures a way to blast the Replicators with some fancy new gun and only Fifth escapes. But not before making a Repli-Carter… who’s conveniently very naked. (Watch Fifth’s eyes… they are not “up here” when she comes out of the wall) O’Neill takes over for Hammond. Phew. Not a bad episode, really.

Oh yeah, and Teal’c has hair now. I don’t know either.

“Lockdown” has what appears to be a virus spread through the crew but it’s actually Anubis’s un-ascended ghost form trying to make it to the Stargate. There’s a very long and drawn out process where they try to isolate the base into different parts and there’s all this fancy lockdown… then Anubis finds his way around it all jumping from person to person to the Stargate only for Carter to change the dial at the last second. Why they didn’t do that in the first place I don’t know. Also why they didn’t then drop a fat naquadah nuke in afterwards to finish him off is kinda silly.

“Zero Hour” was an episode done in an out of order style which felt kinda forced. The rest of the team is captured and ransomed by some Goa’uld but it turns out they were not really captured but just stuck and the Goa’uld were taking advantage of the situation. And there’s some crazy fast-growing plant. This was essentially a characterization episode for O’Neill and it works as that but in almost every other way is annoying.

“Icon” starts in the middle of things and Daniel’s being bandaged in a war zone. SG-1 apparently activated a gate and touched off a coup by religious fundamentalists. This was a really good episode setup. Some of the execution was a little weird, but I thought it was a much more realistic set of events when first contact is made with a very established society.

“Avatar” was done kinda like the Matrix… there may have even been a reference in the dialogue. What it really reminded of was the TNG episodes where the holodeck malfunctions. They used that storyline so much it’s a wonder the holodecks were even cleared for safety at all. Stargate merged the suspended animation pods they found a few seasons ago with a first-person-shooter where Teal’c is trapped in a loop replaying an invasion simulation where the computer keeps ramping up the difficulty. The computer subverts the built in failsafe leading to a great outburst by O’Neill about it “failed to be safe”. They do eventually beat it, and I expected them to pull a “simulation within a simulation” gag but they didn’t. There’s hope yet. Oh, also… no Stargate this episode.

“Affinity” builds on the never-say-die attitude of Teal’c from the last episode by buttressing this episode about his humanity. He moves into an apartment off base, and comes to the aid of the pretty neighbor whose abusive boyfriend won’t take no for an answer. Teal’c teaches her to defend himself and she teaches him love. Yeah. It’s an after-school special. The jerks from that former government run group frame Teal’c for the boyfriend’s sudden death but the truth comes out, so everyone is ok. Apparently even the neighbor-girl who killed someone… details, details. Oh, and no Stargate.

“Covenant” has an eccentric businessman with an accent (Richard Branson, hmm?) putting together some pieces of Stargate mythos threatening to expose them. SG-1 takes a weird tack and denies it and confirms it over the course of the episode. As the business falls down around him he’s eventually treated as a hoax and SGC seems to lighten up on him offering him a chance on another world… which isn’t followed up on. Technically they use the Stargate, but no aliens in this episode.

“Sacrifices” has Teal’c son Ray’ac getting married but there are two issues: a. his wife to be doesn’t believe in the patriarchial setup of their culture, and b. her planet’s under attack. They solve part b and part a is magically resolved. Another Teal’c episode? Really?

“Endgame” was a pretty good episode setup but suffered a bit in execution. The former government jerks are now called “the Trust” and they comandeered a ship in orbit and a teleport beam which they use to steal the Stargate and go firing symbiote-killing nerve gas missiles through the gate to kill the Goa’uld. While this seems like a generally good idea, there’s a lot of collateral damage in terms of Jaffa women and children so the SGC intervenes. A good setup, but you think this might have some consequences in the universe, but everyone’s hunky dory afterwards. Oh, and while the episode has some Stargate use, the badguys are all Earthlings.

“Gemini” has the return of Repli-Carter! She comes in asking to be destroyed but *gasp* it’s a trap. Oh, and she wasn’t doing it for the human-replicant Fifth, she was trying to kill him, too. Double-Cross! Don’t really get the Carter-characterization in this episode, just shows how Repli-Carter is a sneaky lady/android. And she’s not naked. Lame.

“Prometheus Unbound” made me want to not watch the rest of the season. The ship gets stolen ostensibly by a super-soldier who’s a British chick who half wants to seduce Daniel and … well mostly that. She’s borrowing the ship to make an arms deal, or something. I guess this is a Daniel can get chicks episode. At least Hammond comes back for a little bit on this episode. Some aliens, but since they’re on a ship… no Stargate.

“It’s Good to be the King” was maybe my favorite episode all season. They bring back Harry Maybourne who’s taken over the planet he was sent to as king. You expect him to be kinda power mongering but it turns out he’s developed a bit of a conscience. The Goa’uld are coming, and SG-1’s decided they’re going to save Harry. 2 highlights: when Harry comes clean to his people, he’s defended by one of the town elders in a very after-school-special way. All that’s missing is the slow-clap. Also, badguy Goa’uld? It’s Wayne Brady. The real reason this is a great episode is because Jack comes out of his General’s office and rejoins the rest of the team. The desk-job does not suit him.

“Full Alert” has the Trust meddling again, this time stick a symbiote in disgraced VP Kinsey to touch off a good ol’ fashioned war between US and Russia because the Trust are now controlled by the Goa’uld. Oh, guess what, no Stargate usage. Not sure what the reason was for this since it doesn’t really advance anything.

“Citizen Joe” was a clip show… but it was almost watchable. The conceit is Joe the barber (played by Dan “Homer Simpson” Castellanetta) gets an artifact at a garage sale that lets him see the mission reports that O’Neill has been writing. The acting is great, even if the setup is a bit weak.

“Reckoning” is a two-parter set up as an ending to two of the biggest problems: Anubis and the Replicators. Separately, but simultaneously. It is a two-parter after all. Repli-Carter has grabbed Daniel and does some messing in his mind to get what he wants. The Jaffa and Tokra move to take over the Goa’uld planet which conveniently has a super-weapon that will destroy all the replicators. It’s a more than a bit convoluted. At the last second (of course) they trigger the weapon destroying all the Replicators everywhere (since they also simultaneously open all the Stargates everywhere for the blast wave to propagate). This feels like a season finale… oops, Daniel was on that ship.

“Threads” shows what happened to Daniel. It’s the halfway house of limbo, and it’s a diner. I feel like this analogy has been done in the Twilight Zone or something, but rather than dwell on that, I’ll dwell on how long this episode is. It’s revealed that the Ancient Oma Desala that helped Daniel ascend also helped Anubis in the same way, and she feels guilty. The other Ancients are immortal and essentially don’t care, so nobody has intervened. What else is happening? Selmak dies (laaaaame!) Carter’s breaking up with her fiance and O’Neill is considering quitting. It’s unsaid but these last two are potentially related. Teal’c… umm.. I don’t remember him even being in this. It ends rather lamely as Oma “breaks the rules” and interferes by using her energy to stop Anubis, ostensibly killing him then Daniel de-ascends (they don’t call it descends) back to Earth into the briefing room, naked. There is a nice shot of SG-1 finally together “fishing” at the pond with Jack in a very season-finale kind of way…

“Moebius” is an epic episode. They go back in time to steal an artifact from the original movie badguy, Ra, and they fumble it up and spend the whole double episode putting it right by playing out an alternate timeline where all the members of SG-1 join in a different way. It’s a cute alternate universe and there’s some fun with characters in a Sgt. Pepper kind of take. There’s even a cute in-joke at the end as they end the episode just like “Threads” at the pond… except there’s actually fish this time. 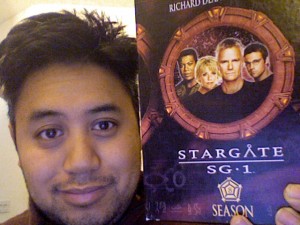 All in all, the season ends and feels much more like a series end. Apparently the last three seasons had been ended this way as the network gave signs of not renewing so the season finales were meant to close it all down. This season had three finales in Reckoning, Threads, and Moebius. System Lords were stopped, Jaffa were freed, and everyone’s who they wanted to be, potentially in the relationships they want to be in. Not bad. So what’s in season 9 and 10? Don’t know yet. Let’s see soon.