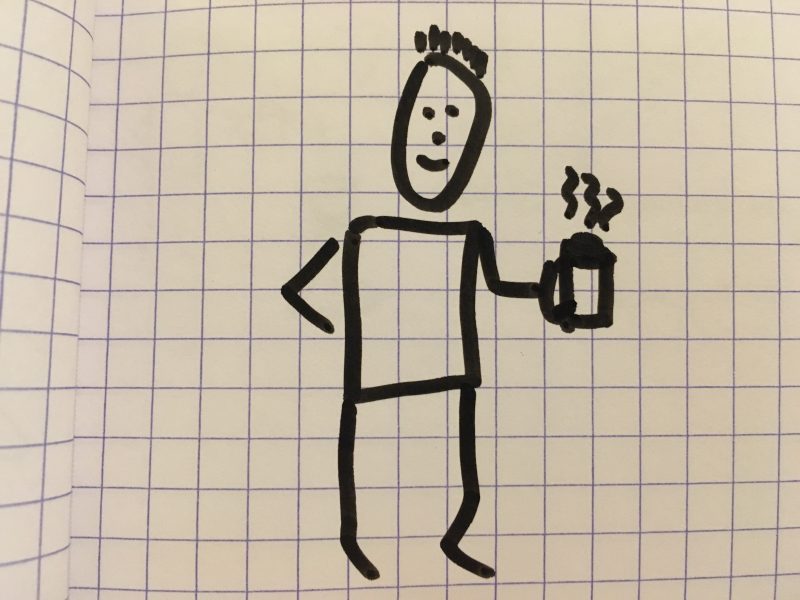 I drink a fair amount of coffee. This post isn’t going to talk about why one should drink coffee and especially not about how coffee (like red wine or omega-3 fish oil or hematite) will extend your life. Instead, we’ll talk about why I like coffee and why I take so long making it. 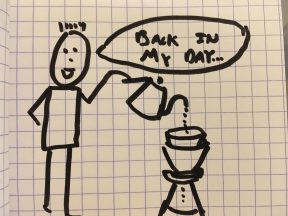 History Lesson
I’m not sure where I had my first coffee, but I do remember one of the clearest early memories of coffee was the McDonalds coffee. This was pre-McCafe, pre-lawsuit, back when it was just drip coffee in the white syrofoam cups. They also had the stir sticks with the tiny McDonald’s logo on the end of them. I went to McDonald’s a lot growing up. So. Many. Happy Meals. Drip coffee was standard back then, and it was readily available, and I drank them. A lot. I had made the connection that an Americano is an espresso poured into hot water to give the volume and caffeine of a drip coffee. I would sometimes do quad-shots to have a similar effect. It was more the volume for me.
Coffee was fuel. I liked how awake I felt, and I did like the taste to a certain degree. I never acquired the taste for cream or sugar in my coffee. It’s certainly nice, but I’ve always taken my coffee black. Both Americanos and hastily made quad shots had the same thing in common with the drip coffee that I liked at the time: amazingly bitter. I equated bitterness with strength. Mostly I liked the feeling of alertness. Oddly enough, for all the coffee I drank back then (and still do) my mouth is pretty sensitive to heat, so drinking coffee for warmth was never A Thing. I did, though, like the flavor… sorta. I just didn’t know what it was yet. Then I went to Hawaii.

What Happened In Hawaii?
Two things. First of all I visited Mountain Thunder, a coffee farm on the Big Island in the Kona region, and I had my first pourover coffee. On that tour it was the first time I’d heard someone decouple strength and bitterness. Coffee could be strong and flavorful!
The better (and not bitter!) flavor of the coffee was because the coffee making folks there understood the balance of variables. MATH!
Yes. I got into good coffee because of math. Water temperature, grind size, roast level, water-to-coffee ratio: all of these were independently adjustable. The only one I really ever varied was roast level, and I tended towards dark which I assumed was more bitter (and it generally is), and the ratio. Once I figured out how to lock all these down and play with them I backed off the bitterness but kept the flavor, and all of a sudden coffee tasted good. 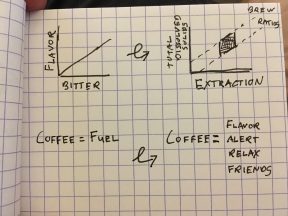 Why Does It Taste Good? Was It The Pouring?
Not quite. I was impressed that they had a coffee bar at the farm where they freshly poured individual cups in small tasting batches rather than sitting around in drip canisters for who knows how long, but I inadvertently ran into what is called the “third wave” of coffee– the first two waves being the initial mass marketing of coffee (think Folgers) and the rise of coffee-only or primarily coffee shops (think Starbucks). The third wave is the rise of farm-to-roaster coffee emphasizing differences in coffees and preparations. Most of the coffee I had growing up was for fuel and fit squarely in the second wave of coffee which emphasized volume and bitterness. In dialing back the bitterness, third wave coffee helped me find more joy in the flavor of the coffee. I joke that after years of abusing coffee I damaged my caffeine receptors beyond repair, and for a few years in there I didn’t drink any coffee and didn’t really miss it. Being reintroduced to coffee with more aspects than just fuel made me really like it, and getting hands-on with the process, especially, opened up my appreciation. 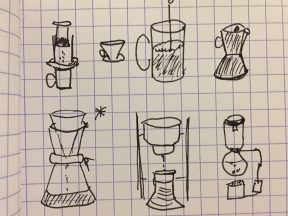 So What Is It About Pouring?
Just like how balancing the variables produced the coffee flavor with less bitterness, I find that pouring balances another set of variables which help me produce the coffee I like. I pour out of a gooeseneck kettle and use a Chemex, but I’ve also in the past used

There is nuance in choosing between these methods, and certain coffees taste better with certain methods, but for the most part, coffee tastes like coffee. The pouring is, honestly mostly show. In fact, pourover coffee is very much like the old-school drip coffee I used to love from McDonald’s, but it’s just in smaller batches.
I make coffee in the morning simultaneously with breakfast (eggs and bacon at minimum), and I’ve just made the workflow work best with that for efficiency. Efficiency comes partly in the workflow and interleaving of breakfast, but also from the efficiency of cleanup.
It also takes a fair amount of time to make the coffee. Maybe 5+ minutes from first pour to first sip. Add to this that I also hand-grind the coffee from beans with a very loud but also very cool Spong grinder that’s at least 30+ years old, and possibly much older. You’ll see from this it’s not just time that I value here but the manual aspect of it. Surely a dialed in automatic brewer would be much more efficient, but there are other times I’d make coffee where time was a positive. 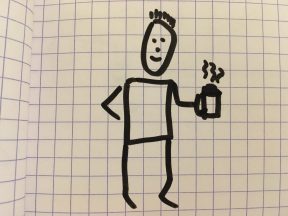 Making Time For Coffee
I was one of maybe three people on a 200-person floor that would clean and refill the automated drip machines at the office. After one day when it was down I decided to just bring in a Hario dripper (think single cup pourover) for myself. I even had a tiny hand grinder. When I would take a coffee break with people I’d bring my small tray of gear along and make a cup for myself. After a few people asked me to make them a cup I decided to scale up and get a Chemex for work (I was already using one at home) and I made 4 cups instead of just one.
The efficiency increased four-fold and what was nice was the time it took to make the coffee was just right for a proper coffee break. Too often the coffee break was just running to get the dripped-ages-ago coffee or eventually the near instant Keurig cups and back to the desk. Instead I was having good conversation with coworkers and many more connections with people willing to stick around. The manual aspect of the pouring also served to transform me and any other coffee folks. I’d often see a sigh of what was partly exasperation that it would not be instant which would morph into one of relaxation. It was funny to think something so associated with being jittery would often give way to moments of clarity and pause. 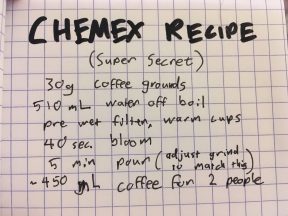 So Are You A Coffee Snob?
I can probably snob it up with most folks. I can talk extraction thresholds and brewing ratios and bloom time and pre-agitation and all sorts of things, but I know it’s just small talk while we get to the coffee. I won’t ever tell someone what to do (or not) with coffee that I make. While I take my coffee black it definitely won’t offend me if you put cream or sugar or whatever you want in it. When I’m making coffee the enjoyment is in the making of the coffee and the conversation that goes with it and the drinking of my cup. If I’m snobbish at all it’s only regarding the cup that I drink. If someone else has made me a cup of coffee, it’s the best one ever – regardless of methods or origin. The process (and agent of that process) lends importance along with the result.