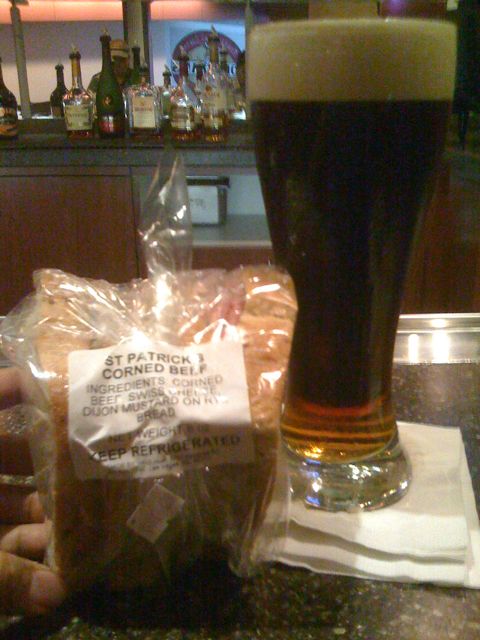 I write this from Corcoran’s pub at the airport by Gate C1.

I left the Las Vegas office relieved. I had done probably two days of work in about half the time.

Last night I went home late after a few beers with people from the office at the Yard House, a beer place with lots and lots of beer on tap. I had been at the office for 5 hours and got a ton done. I deserved both Hefeweizens.

I didn’t gamble when I got back because a half day walking around a barely air conditioned warehouse in 109 degree heat ruins my clothes and I didn’t bring a going out set.

When I woke up I thought it felt too early and it was because the phone wasn’t ringing with the alarm, it was ringing because the office security company called me because someone tripped the alarm.

I passed the call to people more local to the office and fell back asleep for three hours then decided to just go to the craps table.

Craps is the name for the three losing come-out rolls; 2, 3, and 12. I saw three in a row and lost half my bankroll so I left the with my free whiskey and went back to bed.

Today was mostly in the office so I stayed nice and cool. I did have to do a Fry’s run which was eerie as it was just like the San Jose Fry’s except less Asians. There was even the same junk in the super sale bins.
I got almost everything done that I needed to and got a ride to the airport where I took the picture of my Black and Tan and “Irish Corned Beef” sandwich.

I somewhat missed not spending hundreds of dollars in hard way bets and fancy dining, but then I remembered I am a cheapass, and smiled at the free airport wireless.

I may come back Las Vegas, keep the lights on for me.

UPDATE: while waiting for my delayed flight I dropped a 20 into the dollar slots to kill time and won $100 on the third pull! Time to get out of town!