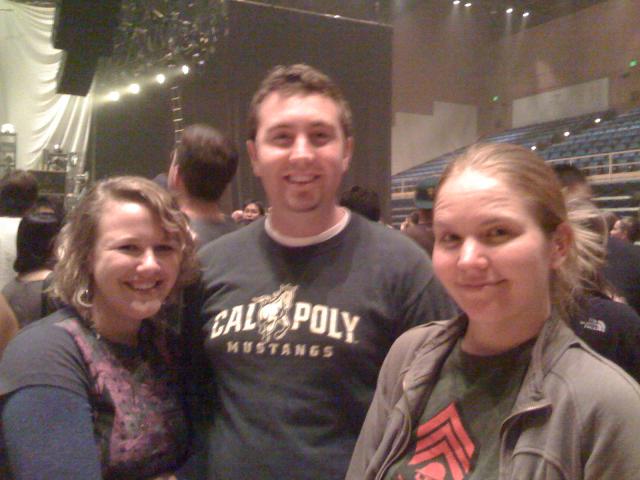 Went to the San Jose State Event Center Arena to see Weezer on Monday with Claire, Ted, and Julie.

We had a quick nosh at Asqew in downtown then walked over to the Arena. This is not the shark tank, mind you. This is on SJ State campus and is more like a basketball stadium than anything else. As a concert venue, it’s not bad if you’re standing. The seats can feel far away. 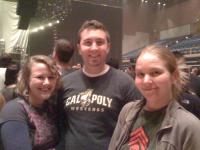 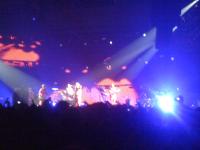 The openers were:
The Relationship: side project band of Weezer guitarist Brian Bell. Their debut album is coming soon. One of their songs “Thought I Knew” was recorded with Brian + the rest of Weezer and is on the newest (red) album. They played the Relationship version of the song, and I think the Weezer one sounds better.

Tokyo Police Club: a rocking band that I don’t remember except for the synth player who totally stole the show. Not only was he insanely enthusiastic about playing the tambourine, he also played his synth with his face seemingly right above his fingers, and he occasionally swung his arms wildly when playing one handed. Julie said he was warding off spirits.

Angels and Airwaves: not-so-side project band of Blink 182 guitarist Tom DeLonge. I always thought these guys were kinda so-so, mostly dependent on heavy overuse of a reverb pedal on their electric guitar and a singing style that bordered on face meltingly precocious. It ended up being an okay set leading off with their bigger radio releases, but the sound mix was bad (not enough vocals, too much bass) and it never really got better. I blame the wireless mics and a drunk sound crew. Universal opinion was unfavorable.

Weezer’s set took a little for me to warm up to. I’d never seen Weezer live, so I didn’t know what to expect. I still don’t know if the way they were changing up the lead singer on a lot of the songs was something they do normally or if it was just for this last record. I will complain that the singalong chorus of “Perfect Situation” sounds better on the album vs. the video and since they performed the video version I am forced to dislike it actively. They played a good mix of old stuff and new stuff, though I would have liked to hear a few of the non-single tracks “The Good Life” and “Miss Sweeney” spring to mind. They did play all the hits, as well as some fun ones: “Susanne” was done as a doo-wop a capella style, covering Pink Floyd’s “Time” & “Breathe” was awesome. They ended by bringing up local band and orchestra folks–seemingly all college students– to play along with Island in the Sun and Beverly Hills. What a fun band.