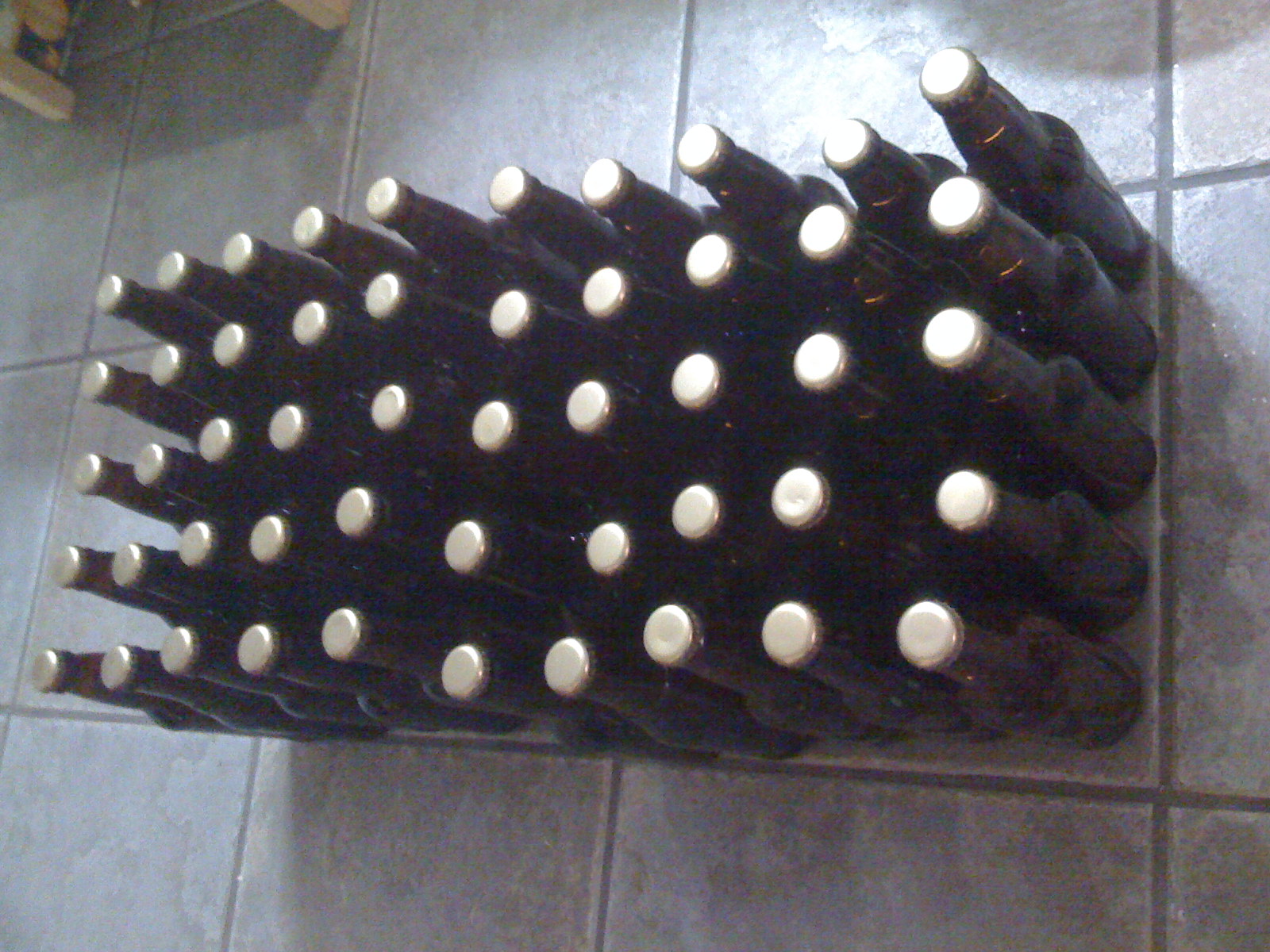 © 2009 Me. All rights reserved.
The beer is bottled! I even had some. It’s still unnamed, and it’s still a stout. At this point in the game it’s not quite ready yet, but here’s the story so far.


After the initial work I had left it to ferment in the guest room. It’s in a 5 gallon plastic bucket that’s sealed with a fermentation lock for the carbon dioxide to escape (but nothing comes in). It’s an ingenious little piece of plastic that uses a very small bit of water to act as a barrier. Air can only move through it if the air pressure on one side beats the other side — in this case the air pressure on the inside increases so it bubbles out. Unless I somehow bring the bucket onto an airplane there’s very little chance of the air pressure outside the bucket increasing such that it gets inside. This is important because the yeast produces CO2 and by allowing that to escape by locking other air out, it preserves the environment’s stability and keeps any beer spoiling bacteria out. Anyway, the short form of all that is that for about a week the fermentation lock bubbles away as the gas escapes. The yeast I have works fine at room temperature, so I just closed the door, so the cat wouldn’t get too curious.

The bubbling stopped on Sunday, so I probably could have bottled as early as then, but I had a few other things to get arranged, specifically all the bottles had to be readied for bottling. This involved soaking in some water to loosen the labels then I scrubbed all the labels off. A smarter person would have done this earlier and probably used something other than a thumbnail to scratch them all of, but hey, it’s not like I have anything else to do at the moment. I started around 11 and finished around 2. After scrubbing them, I filled a plastic bucket with about 3 gallons of water with an iodine sanitizer mixed in and carefully ran every bottle into the bucket and gave each about 4 minutes exposure which should kill any baddies. 60 bottles in 12-bottle batches took about 45 minutes total– each bottle takes a bit to fill on the way in and drain on the way out.

Next I siphoned away the beer into the now clean second bucket to get the beer away from the sediment called the “trub.” The trub is a bunch of things: byproduct of fermentation, expended and dormant yeast, grains or hops that weren’t filtered in the earlier steps, and probably other stuff that just isn’t soluble in the beer now that the sugars have been processed by the yeast.

Once the beer’s in a container without any sediment I dropped in some boiled water saturated with corn sugar. This is what’s known as priming sugar fed to the yeast to reactivate it but not to produce more alcohol — this is strictly for carbonation. I don’t have a fancy keg and CO2 system, so I have to “bottle condition” my beer to finish it. I was able to bottle 50 bottles worth.

The carbonation should only take a few days, so it’s possible it’s ready for a small party this Saturday, but I’m not sure. I’ll crack open a bottle then and see. I had less than a bottle left in the fermenter after bottling all 50 so I poured it into a glass and tossed it in the fridge to cool down to something drinkable. I knew this wouldn’t be representative of the final beer without the carbonation, and also being the dregs of the batch meant I had a little bit of sedimen, but wow. Let me tell you… this is going to be an ok beer. As I guessed the alcohol content will be a little low (3.5ish % alcohol by volume) but it looks like a stout and tastes like one. The low alcohol content just means we’ll all have more sooner.

I can’t wait to have one with you, so let’s set something up soon, shall we? In the meantime, I’m taking suggestions for the new beer’s name.