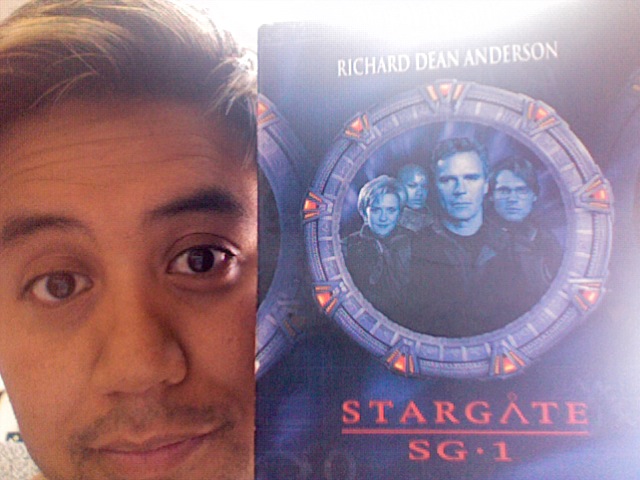 A while ago we gave all seven seasons of Star Trek The Next Generation to our friends on loan. We got in trade all 10 (OMG! Seriously) seasons of Stargate SG-1. I really enjoyed the Stargate movie, and I am mostly sure I saw the first season of the TV show when it premiered. I’ve just finished rewatching that season, and let’s see how I did.

Overall, it’s very watchable. I guess I only saw the first few episodes of this season and the last couple on TV, or those were the ones I remembered. The effects were obviously not as cool as in the movie; this is especially evident when the headdress-mask-armor things clank apart barely exposing the top half of the wearer’s face instead of the swirling-unfolding-hiding motion like in the movie. There is a thin thread of a story arc that continues across the season. There are some throwaway episodes but on the whole it is the story of the team establishing themselves and ultimately confronting the fact that the Goa’uld big-baddies from the movie consider the humans a threat and aren’t just content to let us run all over the universe poking at things.

The good stuff:
Addressing the two-way nature of the gate with the impenetrable iris and the need to identify the travelers. I also like the on-standby guard that has the job of pointing their guns at whoever comes through the gate. They never fire, mind you, just point menacingly and make their guns make all sorts of clicky noises. Hopefully one day they fire up that double-missile battery that is pointed at the gate.

The shaking and yelling whenever a “chevron is encoded and locked” is a little much but it retains the flavor of the movie. Also I’m not sure I’ll ever tire of the horizontal water burst effect of the wormhole forming at the stargate.

Anytime anyone uses a staff weapon. I don’t know how but I have to make one. My only question is, though, why they don’t try to pick up some more of the Goa’uld weaponry whenever they find it. Still, the equipment everyone carries and uses is actually quite authentic for a military operation, and the gadgeteer in me supports it.

The characters are good. So far, the main five goodguys (O’Neill, Jackson, Carter, Teal’c, and Hammond) and one badguy (Apophis) have nice consistent characterizations, and are generally likeable. O’Neill is fracking MacGyver! I was concerned they’d pull the “look at my snake” thing with Teal’c every episode but they only did it a couple times.

The Bad:
Plotline derivations. Sometimes it feels like everything is familiar… because the story is lifted wholesale from somewhere else. “The Broca Divide” is essentially the world in HG Wells’ “The Time Machine” where the light-side people are afraid of the dark-side people. “The First Commandment” is so much like the Heart of Darkness / Apocalypse Now that you can almost smell the napalm. Finally copying the wildly successful season finale/cliffhanger that saved Star Trek:TNG with a big geometric ship coming to destroy Earth was kinda hard to swallow.

Eleventh hour, 59th-minute saves: This is almost every episode, so I’ll keep it brief. I can understand that the drama has to be resolved by the end of the episode, but too many times an actual timer with a countdown is used and the timer is stopped at the last possible second.

Clip Show: “Politics” is a clip show. What the hell, man? Is this a sitcom now?

The Cheesy:
I already mentioned the headress-armor clanking, but it bears repeating. How hard must it have been for the actors to act and convey emotions while barking commands when all you can see is their heavily made-up eyes!

The “women fight back” episode of “Hathor” pulled out every stop on its way to cheesedom, including a reference to a women-in-prison movie, distracting the guards with chick-power, three “I’ve got a gun on you, OW now I’m being knocked out” scenes including two in a row! Oh yeah, and lots of cleavage.

It bears noting that besides this episode, the only two deliberately pandering to teenage male hormones points were in the episode “The Broca Divide” when Carter deploys a regulation cropped tank top and in the pilot where there was the amazingly uncomfortable-to-watch Goa’uld possession sequence complete with full-frontal female nudity. I expect more from Showtime!

I’m going to start Season 2 to resolve the cliffhanger and I’ll report back soon.