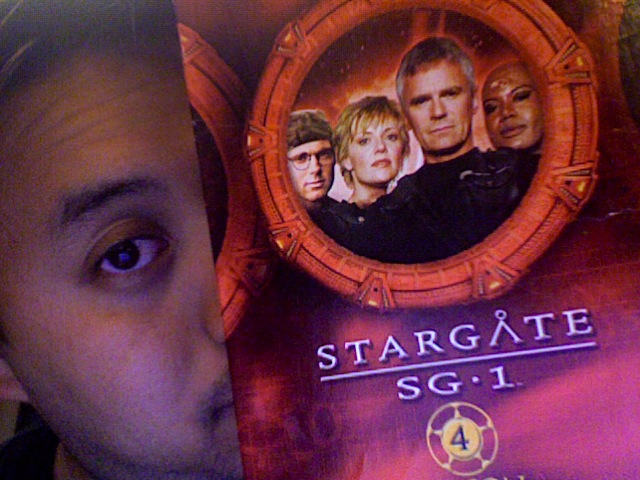 Despite booking more hours this week than last and taking a 9 hour class, I flew through Season 4, and found it a much better balanced season.

(Unfortunately my original post got borked by the iphone app I tried to post with, so this is a little late)

2nd season was “let’s introduce new stuff” and 3rd season was “let’s wrap up old stuff”. 4th season balances the old and the new by having more standalone episodes that worked well in addition to some multi-episode arcs that worked well. This season was also the transition from Showtime to SciFi, so some of the increase in production values, writing, and general feel of the show can be attributed from moving from a network where it was a 2nd tier show to a network that really had no other successful properties at the time.

Some highlights:
SG-1 as somewhat fallible — “The Other Side” where SG-1 finds out they’re helping the wrong side (morally) in a planetary war, “Entity” where the MALP probe’s radio waves harm the indigenous electronic-based life, “Prodigy” where the firefly-like happy creatures suddenly want to kill everyone, “Beneath the Surface” where the team is captured and brainwashed to work as slaves — These are good episodes from a story perspective, though not necessarily content-wise in each episode. It’s obvious the team is doing dangerous things so it’s dramatic to see them mess up once in a while.

Weapon upgrades — No more H&K MP5’s. Hello FN P90. A much more futuristic looking gun, the new standard submachinegun gets a lot more use this season, and not just from O’Neill- Carter, Daniel, and even Teal’c get to fire off some rounds this go-around. I prefer it when they advance the more magical technologies in the show more, but this works just fine. Shooty-shoot!

Sexin’ it up — Maybe SciFi wanted to keep the Showtime reputation despite the fact that Showtime didn’t really ever play this up, but this season definitely amped up the hooking up. The Tok’ra Anise has an unusual penchant for miniskirts, bare midriffs, and push-up laced leather tops. She’s also played by the actor from the Weird Science TV show where she was the computer-generated “ideal woman” It’s mentioned in the episode “Upgrades” that her human-host Freya likes Jack but the symbiote prefers Daniel. Later, Teal’c’s old flame Shan’auc from “Crossroads” shows up as a Jaffa priestess which apparently means gauzey white outfits with lots of cleavage. No wonder Teal’c hooks up with her despite reconciling with his wife just last season! Daniel’s old flame Dr. Sarah Gardner is a little too thin, but the curly red hair must be why Osiris took her as a host.

Maybourne’s back — first briefly in Watergate to explain why the Russians have and know how to use a stargate (The RUSSIANS!), and he has a good sendoff in “Chain Reaction” escaping to a tropical life. By the way, Apophis is back! OK, I knew he would be, but they didn’t really move the arc at all until the cliffhanger.

Carter and O’Neill like each other. (cue audience ooooooOOOOOooo). Their relationship even has its own theme music. Apparently it’s a love that dare not speak its name since they attempt to hide it from the Tok’ra polygraph in “Divide and Conquer” though they gets some tongue hockey on in the time-looping “Window of Opportunity.” Also, they even like each other while brainwashed, as shown in “Beneath the Surface.”

I’ve seen this episode before…. “Window of Opportunity” is essentially Groundhog Day, or if you prefer, the Star Trek: TNG episode “Cause and Effect.” “The First Ones” is essentially Androcles and the Lion. “Point of No Return” is like an X-Files episode. “Tangent” was Apollo 13. “The Curse” was like Murder, She Wrote. “The Serpent’s Venom” was like TNG’s “Chain of Command.” (THERE ARE FOUR LIGHTS!), and “Absolute Power” is every episode where it ends “it was all just a dream.” Which is kinda weird because I think that would be the second time that’s happened to Daniel.

The overall arc is that the galaxy is still dangerous and the (mostly Egyptian) Goa’uld System Lords are starting to lose a little ground to the Earthlings, Tok’ra, and each other. Definitely more Tok’ra involvement this season. There are hints that the Jaffa of Chulak are growing weary of Apophis, so maybe we can get some staff-blasting action soon. I’ve high hopes for season 5, as I think they have a good footing and with any luck they’ll get the all-out system lords interplanetary war started.