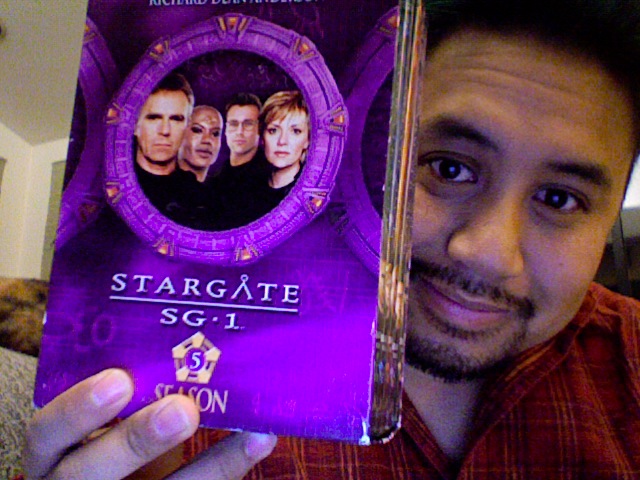 Halfway through on the Stargate viewings. This season wrapped up pretty well — apparently I was wrong about the switchover to the Sci-Fi channel. My good friend Brendan set me straight that this was the last one on Showtime. Did it go out with a bang?

The opening episode closes off the cliffhanger. Finally, they killed Apophis. Finally. Crashed his ship into the atmosphere with a whole mess of Replicators onboard trapping him. I already love this season. There was a lot of good stuff this season, and they continued to balance new story episodes with revisits to some prior material. There was less of a large arc in this season, and the episodes stood alone a lot better. There are underlying themes that kicked in occasionally.

There were a ton of notable guest stars this season. Star Trek alum John deLancie out shadies Maybourne as the shady government guy in “Desperate Measures” and “48 Hours.” Sean Patrick Flanery (from Boondock Saints and the Young Indiana Jones Chronicles) plays an alien who falls in love with Carter and builds his own Stargate in her basement. Grace Park (from BSG) plays a cadet in “Proving Ground” and another BSG alum Rick Worthy plays a Jaffa in “The Warrior.”

I really like Anna-Louise Plowman as Osiris. I’ll ignore that it’s supposed to be a “male” symbiote in a female host because she really is the only hotness in this season.

There were a couple more “oops, I think we messed that up” episodes this season which I like. “Red Sky” where the stargate team accidentally breaks the inner workings of a sun. The ending of the episode also left the planetgoers “faith” intact which normally I don’t like, but it was a good episode nonetheless. “Beast of Burden” where they essentially arm the world’s slaves for a revolt then leave was a good one bringing back the Unas (think the predator from Predator) and my favorite Goa’uld torture weapon — the trident that makes light blast out of the poor person’s eyes and mouth.

I liked the idea of the “Fifth Man” with the alien that masquerades as a team member and emits a pheremone that implants a false memory. I was hoping at the end the alien would save the team by pretending to be a Goa’uld, but instead they shoot down a glider and Teal’c rips off the wing gun and goes all heavy gunner (think Jesse “Blaine” Ventura and his minigun from Predator).

“Threshold” was a good Teal’c episode, but I feel like that was not an excuse to underuse him for most of the season. At least he got to wield the glider blaster again in “48 Hours.” I don’t buy that he killed “Tannith” and got his revenge in that episode, by the by — I don’t trust Goa’uld deaths anymore. I also did not like him blindly following the Jaffa revolution in “The Warrior” and I look forward to the day of the real Jaffa revolution. By the by, after “Threshold” and “The Warrior” I was getting too much of a Klingon society feel from the Jaffa.

There were some cheesy episodes, of course: “Rite of Passage” had too much child actor in it. “The Tomb” was a good episode, but the premise was too much the Mummy. It even had someone condemned to be entombed with a flesh-eating skittering monster. Props for using the sarcophagus as the thing that keeps both alive to maximize torture. “2001” was revisiting the story from last season’s “2010” and it even seemed to end the same way. “Fail Safe” was kinda like Armageddon.

“Proving Ground” was a really bad episode for me. Not only did they bring back the know-it-all cadet from last season, they telegraphed the whole “it’s all a test” way too early ala Star Trek TNG’s “Coming of Age” I guess nobody’s heard of Kobayashi Maru?

The Summit/Last Stand midseason cliffhanger shows had a lot of good stuff in them but I feel like not enough was followed up on. The Goa’uld/Tok’ra fight seemed pretty interesting to start, but the lack of actual battling was kind of a bummer. It does set up a war with the System Lords which I like, but again, not enough battling!

“Menace” had the creator of the Replicators (think erector-set/lego borg-like bugs) awakened only to be a nanotech robot with a child mind. Apparently human guns are very effective against the Replicators vs. staff weapons or other energy guns, so nearly everyone got to wield shotguns this episode. It was nice to see General Hammond cocked, locked, and ready to rock.

There were a couple things to say about the other stargate teams out and about including the Russians in “The Tomb” and then “The Sentinel” brought back some of the rogue Stargate team that was caught a couple seasons back to fix a problem *they* made. I do like that he SGC doesn’t operate in a vacuum on earth and there is some infighting (see “Desperate Measures” and “48 Hours”).

“Wormhole X-Treme” It was the 100th episode, and total fanservice. That’s fine. Unfortunately, it was structured almost exactly like “Point of No Return” from Season 4, but it was good to see the sense of humor they have about themselves. That reminds me, I found this video which is from the commentary track which has the creators of the show singing lyrics to the theme. Utter hilarity.

“Meridian” was a weird transition episode that could have been a season closer. Especially with the content of the episode. The end marked the departure of a major team member. I’m not too worried about it because I know for a fact the character comes back — I think it was one of the very few episodes I actually saw on TV in a failed attempt to try the series out. It was also a better episode than the closer (which wasn’t a cliffhanger as it was changing networks at the time). The closer “Revelations” more or less did nothing but teased the next season with the new big-bad being Anubis who not only has the sexy Osiris as protege and he can capture and torture the formerly cool aliens the Asgard.


All in all, some good stuff. We’ll see how Season 6 comes along soon.