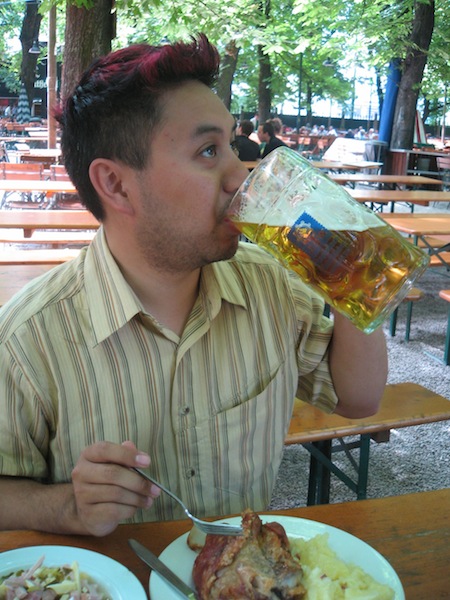 Bottling a beer today. Maybe. We’re pretty tired from cleaning the bottles, and that’s just the outside. We reuse beer bottles, so we clean them inside and out, santize them to kill any nasties, fill, and cap them. We need about 50 bottles per 5-gallon bucket of beer, so it can be an ordeal. One day we’ll graduate to a keg, but for now, filling bottles means it’s easy to bring some to a party and give to friends.

Read on for a couple things we’ve noticed about bottles and their labels:

Gordon Biersch and Samuel Adams beers are great craft beers and quite tasty, but their labels are horrible. The glue they use isn’t easily weakened after a soak in water, so if you can peel off the label, often you’ll end up with a white papery mess the size and shape of the label that needs scrubbing off with our scouring sponge. Gordon Biersch is especially annoying because unlike most beers which have a main label and one on the neck, they have one on the back as well. Hoegaarden Belgian White Beer has one of the easiest labels, and there’s even a small tab for their removal. There’s still a bit of scrubbing to do, but the glue comes off very easily. The cleanest label in this batch, though, has to be from the Mendocino Brewing Company whose glue must be water soluble because their labels released themselves intact while soaking in the sink. Most other labels will fall inbetween those extremes. A notable standout is the Guinness Draft Stout bottle which has an all-plastic label that is not held on by glue but appears to be shrink-wrapped onto the bottle. This means a quick slice with a knife and the label comes right off. Of course the nitrogen widget in the bottle requires a bit more finesse (and needlenose pliers).

Most bottles are 12 oz and fairly similar, but there are some odd sizes and shapes. Hoegaarden and Guinness use very curvy bottles which a bit of flare in the neck and base. Many hard ciders come in bottles that are metric and often a bit larger but not quite twice as large. These can be given singly to fans of the beer, or to couples that are lightweights. Green bottles are supposedly less desirable in comparison to brown bottles for homebrewers because green bottles do not do as good of a job filtering UV and some beers can be “sun-struck” and develop an aroma described as “skunky.” I’ve never noticed this, but I have mostly brown bottles. I read somewhere that it can take less than a minute to develop this odor so looks like there’s not much that can be done other than use brown ones or keep the green ones out of the light. Commercially brewed beer is supposedly not immune to this, but I’ve not read anything definitive. Cans are totally immune to this sun-striking, but I don’t know of a way to re-pop-top a can.

We can only cap bottles that use caps that come straight off. Twist-cap bottles can’t be recapped with our equipment. This is not usually a problem but one of our favorite beers uses twistoffs: Black Toad Porter which is most easily available at Trader Joes. Supposedly some champagne and sparkling cider bottles can be capped with regular beer bottle caps but we haven’t encountered those yet.

Some beers are just fine from a bottle and some deserve their own glass. As I alluded to earlier most beers are sold in 12 oz bottles. Most beer establishments serve beers in glasses that taper to the base with a shallow angle and are are called pint glasses. A pint is 16 ounces, but since the bottles hold 12oz and bars serve both beer from bottles and beer from the tap rather than have pint glasses 3/4 full, they quietly use smaller glasses. Check your glasses at home with a measuring cup and see what you get. The Germans know how to server their beer in a glass. While we have these little 12 oz and 16 oz pint squabbles, beer there is served in Maß (i.e. Mass) glass steins with handles or Halbes (i.e half) glasses which usually are tall pilsner style glasses. Maß is a full liter (33.8 oz) and Halbes is half that.

When pouring off a homebrew into a glass (recommended), there are two thoughts: you do want the stuff at the bottom or you don’t. Most homebrew isn’t as perfectly homogenized as the commercial stuff, so there may be some settling in the bottles. Quite often the carbonation step is done in the bottles and that means there is going to be some residual stuffs (mostly the brewing yeast) at the bottom. If you don’t want it, pour it off into a glass and leave the last bit. The beer’s taste may be slightly altered by the yeast, etc, but the major reason for the dislike is that it is unattractive visually. Get over it. If you’re getting a homebrew from me, it’s free. Also, the yeast will be fortified with vitamin B12 which helps prevent hangovers. Win! Also, many homebrewers get fancy and add spices to their beers (some bigbrewers do this also: New Belgium and Hoegaarden come to mind) and in those cases you do want to catch everything from the bottle.