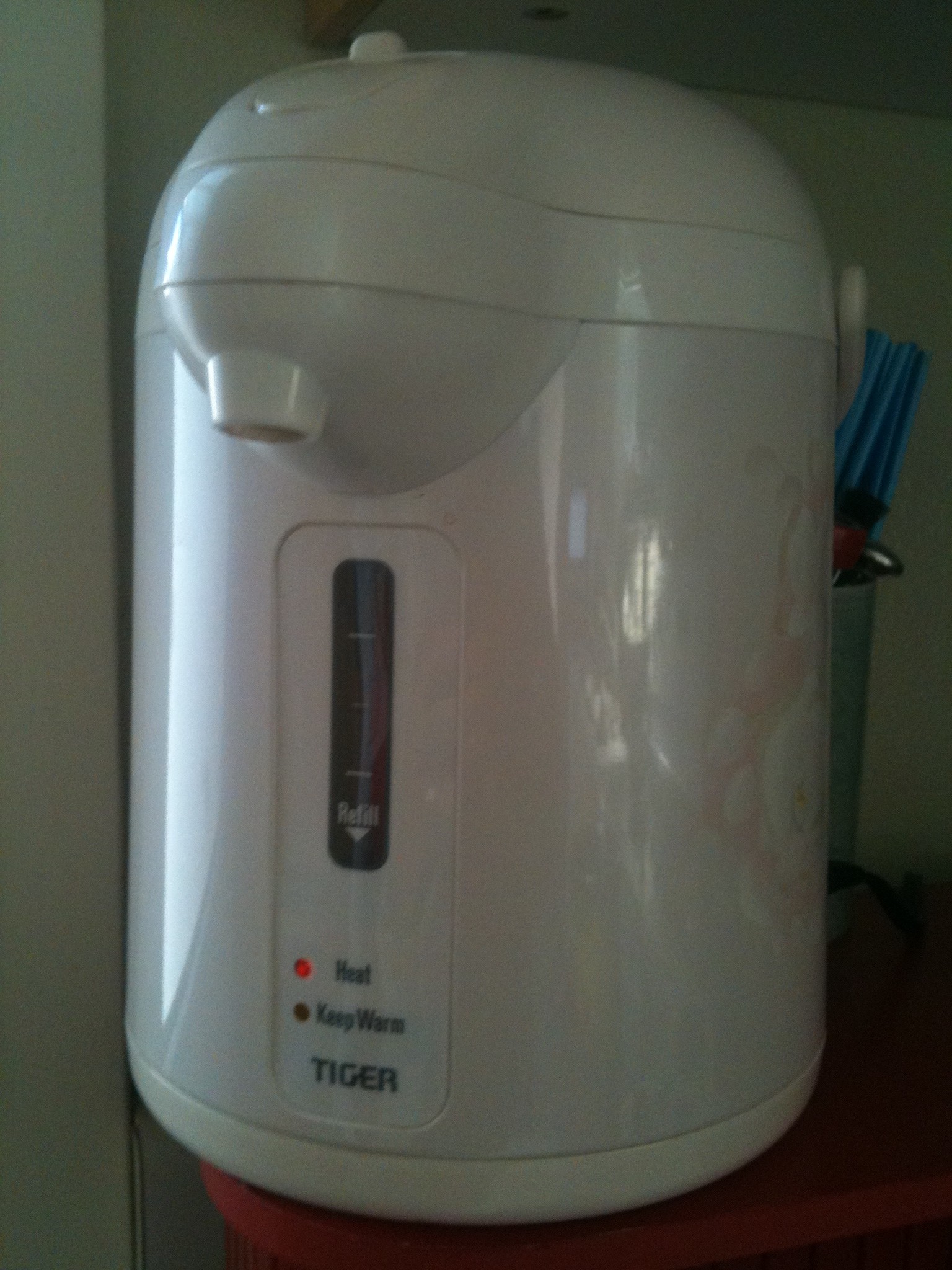 Time for a new feature on nicehat.org. Finally. Open Sorcery is where I’ll go over how I do things. It’s a pun on “open source” because I’m showing y’all how I do it. Many times I and others consider this to be kinda magical, hence Sorcery.

If you haven’t stopped reading yet, thank you. Please continue on for the incantations and rituals about how I have coffee!

Coffee is great. I love a syrupy espresso and the delicate nature of a french press and even a drip coffee makes me smile before I have it. I don’t really drink it for the caffeine, although a little caffeine adds 5-10 bpm to my average heartrate while working out, so there are some benefits. I don’t get jittery nor restless, or at least the coffee doesn’t seem to make that worse than my normal extra energy.

I discovered not too long ago that while my favorite style of coffee is probably espresso, I don’t have the money nor counterspace to get a really proper machine, and I really wanted to be able to have coffee when I wanted it at home because, well, I’m kind of a cheapskate. You may remember that I was recently fantastically underemployed, so dropping three figures on a coffee machine seemed like a luxury item. I’m not even going to go into the fact that some of the really, really good ones probably involve an investment of more like 4 figures, especially when you factor in the grinder. But I’m getting a little ahead of myself.

The mindset of my plan was to have coffee at home when I wanted it without too much money nor counterspace nor maintenance. Big fancy machines are notoriously bad for all three of these because they are expensive, have fairly large dimensions (i.e. bigger than a toaster), and have lots of moving parts and widgets that need fixing as they’re generating high amounts of pressure. I’ve yet to find an espresso machine that was the right balance of things, and frankly I’ve stopped looking given my solution. There are some of those coffee-pod machine thingies that reduce the complexity somewhat, but I thought they were gimmicky; what happens when the pods go out of style?

Coffee beans themselves are fairly irreducible and ubiquitous, so buying those is the right tactic to take. Grinding them immediately before making the coffee seems to be the best thing for flavor experience, so that meant I needed to buy a grinder as well as a coffee machine (or else buy a fancy super-automatic one that grinds it AND makes the coffee… also kind of expensive). Also, burr grinders are better thought of vs. blade grinders. I had a whirly blade grinder and while it worked ok initially, the new way is so so much better.

So what is this new way? Enough with the leadup! My solution is an almost completely manual way to make coffee that results in an almost-espresso which can be finessed into and equally almost Americano, i.e. a good cup of coffee. It takes as long as my water heater can get to temperature plus about 5 minutes, so 15 minutes or so, and I can make as many as 4 cups in that amount of time, though it works a lot better for just one or two. 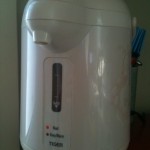 Hot Water Heater, the kind from every Asian market ever. It gets the water to about 170 which is hot enough. I read somewhere that boiling the water is too much heat because it boils the oxygen out of it. I don’t know if I believe this, but I also know that when things are too hot they burn my mouth, and while I like hot coffee, I don’t like scalding coffee. This is probably in the $30 range, though I’ve had it for almost my entire life, so who knows. 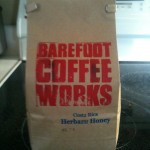 Good coffee, I prefer from Barefoot Coffee:
Their coffee is generally 4 weeks old or less. Older than that and you might as well buy something pre-ground. OK, I’m a snob. But not quite a 2-weeks or less coffee person. I will buy the half price from Barefoot when it’s at the 3-week stage. I will also buy coffee from Trader Joes, but generally the darker roasts. (Red can Sumatran!) If I had my druthers I’d buy Kona coffee all the time, ideally right after hopping off my seaplane while in Kona. *sigh* Barefoot coffee is $12/lb on the low and $25/lb on the high, Trader Joes is more like $7 average though they do have good Kona coffee… for $19/14oz. In a pinch Peet’s is good. 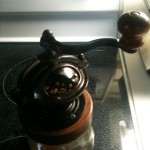 Coffee grinder. I have one from Red Rooster Trading Company which is a burr grinder (yeah!) and it’s manually operated. It takes about 6 minutes to grind two coffee’s worth of beans which is less time than it takes the water to heat. Why manual? It’s quieter than any electric grinder, the cardio wakes me up so I’m even more receptive to the coffee flavor when I get it, and it’s pretty awesome… it grinds in to a Ball jar! About $65 with shipping. I’ve seen Zassenhaus and Peugeot grinders that are supposedly very good and last forever, but this was the only manual burr grinder I could find made in the good old US of A. 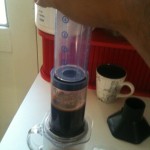 Coffeemaker. Yes, this is a coffeemaker. It’s about $20, and it’s fantastic. It’s the Aerobie Aeropress. From the same people that make the distance-record-making Aerobie flying ring comes a big “syringe” which forces water through coffee grounds in an espresso-like way using air pressure. The difference is this uses plain old muscle again. It takes about 2 minutes to press the coffee and another minute to divvy it (if you’re sharing) and add water, cream, sugar, etc for a more traditional cup or just have straight as a decent strong cup of tiny coffee. My brain and eyes know it’s not espresso, but my tongue doesn’t care. It’s tasty. I like it more than any other coffee method I could find, and it’s a cinch to use and clean up. Let’s look, shall we? 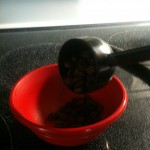 First I heat the water in the aforementioned water heater. While this is going, I measure out some coffee into a flexible silicone prep bowl, this is because I have to pour it into the little door on the grinder, and having a flexible bowl you can easily pour out of means I don’t need to find a funnel. I use three scoops, giving two people the strength of 1.5 cups of coffee in the end. I like strong coffee, so when it’s just me, I sometimes do all three scoops anyway 🙂 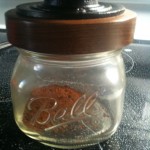 The grinding takes a bit. I usually brace the bottom against my hip then holding the top, with my finger over the beans door (since it sometimes will slide open) I do 50 rotations then switch hands. After about 6 minutes which is maybe 400 spins, I’m done. There is a small amount of adjustment that can be done, and I’m two notches up from the finest grind. It comes out like a light sand which is just great. 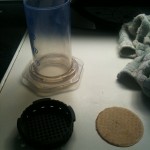 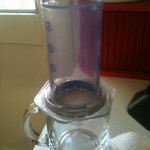 I then assemble the bottom part of the Aeropress which is a plastic tube for the grinds, a plastic filter basket, and a small paper filter (you get something like 300 when you buy it, and I’ve found reusing them a few times doesn’t hurt anyone). This sits on top of the mug I use. I use a nice sturdy clear mug so I can see what’s happening and so I’m not worried about it tipping over. 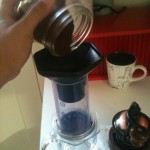 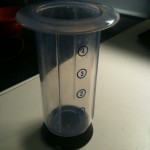 I use the funnel they have to pour the grounds into the bottom part, then I have to get the upper part. This is another plastic tube with a rubber base which fits the bottom part exactly. It’s also numbered on the side for the amount of water appropriate to the amount of grounds. 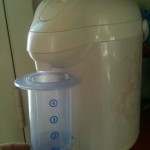 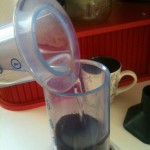 I pour add three “things” of water equivalent to my three scoops of coffee. Neither the number nor the scoop seem to be standard measures like teaspoons or ml, so I haven’t experimented much with these, but the flavor’s just right at 3 and 3, so that’s what I do. 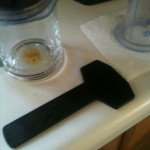 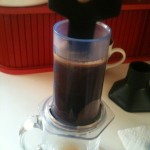 The rate of pour doesn’t matter because next is stirring the grounds to wet all of them and get them to bloom a little. If the grind is right, water will mix enough with the grounds that it won’t drip through the paper filter immediately. Too little beans and too coarse a grind will mean water will drip through before the fun step. The included plastic stirrer is just the right height so it doesn’t scrape the filter paper at the bottom. Engineering! 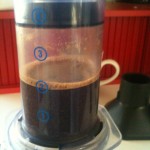 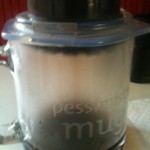 The fun part is pushing the syringe, and it is like a syringe. The rubber stopper of the top part doesn’t touch the grounds until the very end when all the water’s gone. You’re not supposed to really lean on it, I’ve found about 15ish pounds of pressure is enough. The creator of the Aeropress says push down an inch or so and keep that level of pressure until you start hearing air escape through the grounds. I usually push into the rubber meets the grounds and that gives me a nice bubbly top reminiscent of espresso crema!

Once it’s pushed through the result is the aeropress with the coffee grounds puck that needs just be pushed out into the trash after saving the paper filter if you wish, all that just gets quick rinsed. The funnel, scoop, and paddle need a quick rinse too, but otherwise cleanup’s a snap and what you have left is a very very tasty cup of coffee. 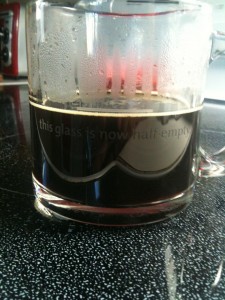 Bonus points for those that notice the mug is the “Pessimist’s mug” from Despair.com

So that’s Open Sorcery this time around. Man, I need a cup of coffee.