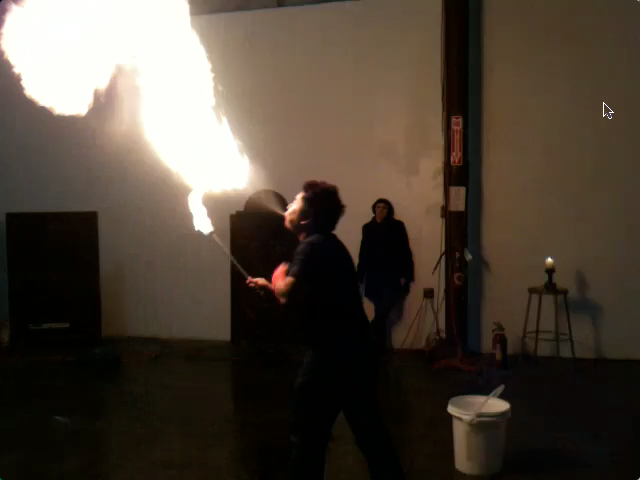 A couple weeks ago we went to The Crucible Revival 2011 benefit concert to raise money for the artist and educational space in Oakland. While there I was reminded of the reason I was so enthralled by The Crucible — yes, they teach jewelrymaking, enameling, wood turning, glassblowing, cold casting, at least four kinds of welding, and blacksmithing which is impressive enough. The big thing for me was the fire performance classes– specifically fire eating and fire breathing!

We were told during the concert that we’d get a discount if we signed up for any classes, so Julie signed up for Enameling and had a great time, too. She’ll likely write it up on her website, so stay tuned. On the same days as her enameling class were both Fire Eating and Fire Breathing — four hours over 2 days, so I had to sign up for both. I was completely obligated. They also offered sections on Fire Poi spinning (balls on string or chain that are swung simultaneously… eventually on fire), Fire staff (twirling and working with a 4+ long staff… eventually on fire), and Hula Hoop. Advanced hula hoop is Fire Hoop.

I’ll admit I’m closet pyromaniac. I can see the news report now, as the signs were all there: as an altar boy I always volunteered to light all the candles before the service and snuff them all after, learned to light charcoal barbecue grills without the aid of lighter fluid, was good at the bunsen burners during chemistry class, likes spicy food… OK, the last one maybe not but as the date approached for the classes, I was thinking more and more about the logistics of fire eating and fire breathing and my point of worry was that I’d be doing irreparable damage to my mouth or taste buds. My mother-in-law even expressed this to me, so I kept it in the back of my head. I really enjoyed spicy food of all kinds, so while it’s more a comic lead in to fire eating, I didn’t want to lose any sensation or diminish anything by taking up these skills. Luckily, it’s unfounded. I mean it is possible to burn oneself in the mouth and cause damage, but I’m getting ahead of myself.

The classes were held in the middle performance space at The Crucible which is a very, very large warehouse building. The ceiling is very high and because it’s a warehouse, it is extremely cold blooded. I was told it will retain either the coldest temperature from the outside or the hottest temperature from the outside. In the summer, every space feels like the smithy where they have the blacksmith forges on, and in the winter, every space brings out feelings of hypothermia.

A group of 6 people showed up for Fearless Fire Eating and we were seated around two small folding tables where our instructor had placed some fire extinguishers. Patricia Chavez had been doing fire performance for a long time and got connected to the Crucible with respect to welding classes and teaches some of those also. Day one started out with everyone bundled up and given a quick tour of the facilities to see the different artist studios. I was very impressed with all of them: in the metalworking sections they apparently will offer a bell-making seminar class including lost wax casting and forgeworking, and in the woodworking class they were making these comically sized gavels with the lathes.

Day one’s first two hours proceeded with a safety lecture and we were handed materials to make our own torches. This actually took up almost the rest of the time. At first it was a little odd spending so much arts and crafts time, but On second thought, it meant that we knew a lot of fundamental things about the equipment: the base rod for the torch should be aluminum or steel and NOT copper so it doesn’t conduct the heat so much down to where one holds the torch. The kevlar head can be made a few different ways, but the key thing is it has to be small enough to fit in one’s mouth, but large enough to hold enough fuel. The kevlar isn’t the thing that burns, but the fuel. In fact, it’s not even the fuel but the vapor that comes off the fuel as it mixes with the open air. We talked about materials a lot and fuel selection and best practices for safety. Patricia was very candid about what was good and what was bad and sprinkled tidbits of personal experience for both. While very professional, it was fun to hang out and do arts and crafts with a bunch of people with the anticipation of what was happening the next day. At the end of the two hours, we had two eighteen inch aluminum torches with kevlar heads about an inch in diameter made two different ways and a health sense of COOL.

Dragon’s Breath (the fire breathing) was offered on the same day, and I was a little concerned that the fire eating class was a prerequisite though they were both listed as entry-level classes. I was assured this was fine, and there was one other person who was taking both sections. In this class, it was only five people, but it followed mostly the same pattern: we did a meet and greet, did the tour, and then sat down to make torches. This time, though, the torches were a lot heavier duty. Since these are not for putting in the mouth, they were made to have larger heads to hold more fuel for a longer burn. They’re also made a slightly different way, so we fought off the growing cold (it was 5:30pm when it wrapped) to put our torches in order. Sunday would be the day.

On Sunday the weather cleared up. It was not quite as cold inside. It was about to get a lot hotter. We did a brief safety prep of a few fire-damping towels (wet towels wrung out to be used for putting out torches between fuelings and as a way to put out any fires), a CO2 fire extinguisher (safer for people vs. ABC extinguishers), separating the fuel sources from the fire source (a candle well away from the small paint cans of fuel), and a recap of the previous day’s hints.

Then we proceeded carefully with torches fueled with rubbing alcohol. The flashpoint is quite low, so it’s safer to use to practice. We used this time to get used to having fire fairly closeby and touched it to our hands to transfer fuel to burn up in our hands trying to find a balance between enough to be visible and not enough to hurt. It did sting a little to do, but it was surprisingly safe and easy to scale into find a good balance. Then our instructor demonstrated the real meat of the discussion: a real fire eating. Extinguishing the torch in the mouth is kind of a cheat (ssshhhh, it’s blown out) but it is actually put into one’s mouth while still on fire! Saliva is a wonderful thing. It keeps it all safe. After a couple tries with the rubbing alcohol we graduated to camp stove fuel which is really bright and burns a bit hotter, but it was pretty easy to acclimate. We next moved up to transfers where we take one lit torch, touch it to the tongue to transfer fuel to it and quickly touch an unlit torch to end with two lit torches. Oh, it’s weird. I found I was better doing it left hand to right hand, but right hand to left was harder to get consistently. The next trick was called Dragon’s Breath where one holds the lit torch in the mouth for a couple seconds to accumulate some fuel then to draw the torch out and exhale just the slightest bit to breathe a lick of flame out. The final trick was using the dragon’s breath to light another torch. I only got that to work once, but I had a lot of fun doing it. Everyone in the class had a lot of success.

There was a half hour break between that class and the fire breathing class (also called Dragon’s Breath). We were told to bring an extra shirt because it might get a bit messy today. The key to getting fire breathing right is to spray the fuel out of one’s mouth so it atomizes. It’s not a stream but a mist. We practiced this with water. Despite being a sunnier day, it was still quite cold at The Crucible, so spraying water out of one’s mouth for about 20 minutes trying to fine tune it left some of us very cold. There were varying degrees of success, and it was hard to tell how well I was doing because the spray is just up and away. The guy next to me was a trumpet player, so he was blowing off a lot more with each breath. We moved to the pure lamp oil and it was easier to make it mist without big dribbles like the water, but it still needed some fine tuning. It was easy to have more fuel in the mouth than I could get air behind it, so it looked like I would get two or three bursts per mouthful of fuel. Too much fuel and it’s hard to be consistent with the stream, too little fuel, and I’m guessing it just isn’t as dramatic when it lights.

Lighting it off might have been the most satisfying thing that day. this was maybe thirty or forty minutes into a two hour class, so we spent over an hour taking turns blowing flame. I don’t have that much to say about this. Eating flame is a balance of timing and showmanship that shows off how pushing just a little past a conventional comfort zone (i.e. fire safety) can result in amazing results. By contrast, breathing flame is an exercise in lung capacity. Here’s a quick video I asked someone to take.

The fire eating was fun, but the fire breathing was all kinds of awesome. Thanks Patricia Chavez and The Crucible.