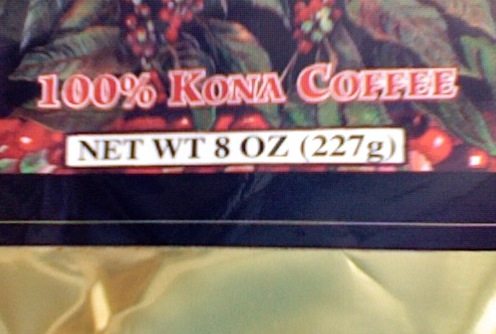 OK, what happened? I used to be a “I don’t drink coffee” person, but something broke recently, and the addiction’s on. Read on to see how I manage it.

I never really had coffee. I don’t have problems waking up in the morning. I actually have problems going to sleep, but that’s something else entirely. I operate on what I think is a relatively small amount of sleep (6 hours) and generally am not tired physically nor mentally over the course of the day or evening. I haven’t had soda regularly since starting Weight Watchers, so my caffeine intake is generally very low. In college I was seduced by the coffee-in-a-bottle/can craze that blew around in the late 90s, even though I generally like bitter-tasting things and would prefer the coffee black or even espresso. Still, I found I had a pretty high tolerance to caffeine’s effect of nervousness or the shakes.

Enter the last trip to Hawaii. We were on the Big Island and while there we sampled the famous Kona coffee (being on the right side of the island and all) and right away I could taste a much righer flavor vs. any other time. I think my palate’s actually developed a bit from brewing and tasting a lot of beer recently, so I’m able to better pick out the different flavors in the coffee. While on the trip I had a cup of coffee almost every day for a week, and while I’m not fiending for it I definitely notice that a quick cup is good for offsetting the usually sweet things I eat as a meal finisher accompanying breakfast or dessert. The best part is since I don’t add cream or sugar, generally, it’s essentially zero calorie load. Some might argue the jitters would make it a negative calorie net effect, but I wouldn’t depend on that for weight loss.

Regular coffee is nice as a flavor profile, but having had different coffees for the last month or so, I’ve decided squarely in favor of espresso. It has just the right amount of bitterness and body, the temperature is usually just right immediately (I have a baby mouth when it comes to hot and cold temperatures), and I thought it was relatively simple thing to make vs. say, a double-half-caff latte. (I was wrong… more later) I’ve also decided that finding a good way to make my own coffee at home vs. buying it outright will add to the experience so I did some research into coffee machines.

Armed with the Alton Brown Good Eats episode on espresso that I just happened to catch a week after deciding to figure this out, I combed the internets for a reasonable price/feature balance, and came up pretty disillusioned. First of all, espresso isn’t easy out of the gate. The beans, the roast level, the grind, the measuring, the tamping, the temperature, the pressure, the brew time, the yikes! Obviously there’s a lot of customization there that I hadn’t seen. Now, not all of that may apply to me as I was getting espresso from a variety of sources and my palate was developed enough to like coffee but not enough to quibble over the flavor profile from a full city roast. My main criteria were handling ground coffee, a decent milk frother (for others into that), a small enough profile that it doesn’t dominate my premium counterspace, and a good reliability rating. In other words, cheap is fine, as long as it’s not too cheap. It looks like a good-enough machine can be had for about 100-150, and I heavily considered the Krups XP4030, DeLonghi EC155, and the Lello 1375 Arriete. These three were in that price range, were all featured on the site Single Serve Espresso as well as having the most reviews in Amazon by a long shot. By the way, the machine that Alton Brown seemed to recommend (but the brand was masked) looks like the Saeco Aroma which can be had from Costco (of all places) for about $189 vs. >$300 in other places.

So, there’s my research, but I didn’t buy them. I found something else. The major factor in the less expensive machines seems to be reliability of parts, and it looks like warranty repair is nearly impossible as most of the manufacturers are Italian though the actual manufacturers are in China making for a nearly unfixable product. Instead of adjusting the price up to get a better quality, I actually went down and found the Aerobie Aeropress. Yes, it’s a gadget, but this one works! I’ve used it for about 5 drinks so far and I am probably another week away from dialing it in just right. It works similarly to a french press (which I also have) but instead of steeping the grounds then moving them out of the way like in a drip coffee or tea bag system it uses the pressure to force the warm water through the grounds resulting in an espresso-like coffee extract. Now it’s not quite the same, the oils are not extracted to form the crema as in a traditional espresso, but what results is a very strong and concentrated coffee extract which tastes close enough to an espresso for my purposes, and from what I’ve read it will get a lot closer the more I tweak with it. The instructions say you can make a “coffee” by topping off with hot water which I guess is technically an Americano. The thing I like about the Aeropress is there is a mad scientist concoction methodology in its operation. It’s also fun taking a $30 machine to task against $300 machines for flavor.

I think if I do anything else in this space it will be to invest in a grinder rather than using pre-ground stuff for richer flavor. Also maybe a hand-held milk frother could work out. As of right now, my coffee needs are few and far between and I get what I want very cheaply, and with just enough DIY to make me happy.