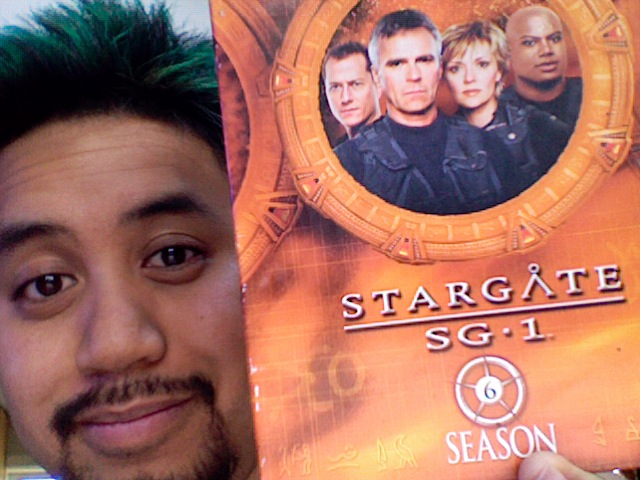 Am I really on Season 6? Wow. This was a good season! More like this!

This season had a bunch of good episodes. I mostly like the cinematography, special effects, and story upgrades. It’s a much more polished show than it has been in the past. They’ve definitely hit their stride of standalone episodes and adding in continuing stories.

For a season when Daniel was “dead” he’s in a bunch of episodes. “Abyss” had him sort-of-helping with Jack. “The Changeling” had him appear as a medical/psychological doctor in Teal’c’s alternate mind reality, and back for real in “Full Circle.” I liked Daniel, so it was good to get him back in, even if he was a little much in the sweater. His ascended form reminds me of the overly good-natured, wholesome people in the “real world” in the Matrix — lots of light colored cotton and soft voices.

That said, I liked Jonas Quinn also. Corin “Parker Lewis” Nemec did an admirable job as the “fresh pair of eyes” in many episodes as shown in Redemption 1 & 2. He even had his own infirmary emergency episode in “Prophecy.” There are hints he’s got the potential to be super-human from that episode, so that means he’s a real member of the team now– Carter had the Tok’ra in her, Teal’c has the mini-symbiote, Daniel’s ascended, and this season Jack got a symbiote, too after “Frozen” leading to “Abyss.”

About “Frozen” — possibly the best shot episode this season. I’m surprised they introduced the oldest surviving human by revealing her as an “Ancient” then killing her, but the editing in this was tight. When the scientist-friend of Carter collapses, she does so in the security camera monitor’s view in the background and when everyone runs in to help, there’s no extra camera angle. When Dr. Fraiser counts off the move to the gurney they jump cut the lift to the drop. Brilliance.

Another great looking episode, “Memento” had very filmic look. They recaptured one of the best sequences in the movie where the people band together to uncover and pull up the Stargate from the dirt. Great look.

“Redemption” was ok to really introduce Anubis and give Teal’c some closure with his son, and to have BSG’s Aaron Douglas as a Jaffa.

“Nightwalkers” was another X-Filesy episode, though it was handled very well. Speaking of the Matrix, what was with everyone wearing all black and expecting to be incognito? Also, normally it’s not my thing, but Carter in black leather pants is ok with me.

“The Other Guys” was a little painful for me. Especially since it cast John Billingsley (Phlox from Star Trek Enterprise) as a trekkie scientist friend of an SG-1 fanboy. As if that wasn’t enough, they decided to go one further and make it “all a dream” I could shoot the TV.

“Shadow Play” starred Dean Stockwell. Wow, another BSG guy (among other things). This premise was also kind of a dream, but it was not a slap in the face. I liked a lot how they brought back Jonas’s war-torn planet, and I’m hoping they revisit this soon.

“Cure” I really liked with the planet’s people exploiting a “queen” symbiote to make a cure-all drug. Always good to see the gray-area episodes, in my opinion. I liked “Forsaken” for the same reason with the team helping the wrong people initially. Good episode to show the human-centric bias.

“Changeling” was written by Christopher Judge (i.e. Teal’c!) and reminded me a little too much of the Worf-centric episode “Parallels” where he bips back and forth between two realities, though with a slightly less dramatic ending. I did like the crazy-he’ll-kill-us-all-Riker in that episode, but I digress. I don’t know if I like how they resolved it with Teal’c losing his symbiote. We’ll see if they revisit that. I’ll even forgive they brought Apophis back.

I didn’t expect the X303 to be the “Prometheus” since the 301 and 302 were glider-based. Kind of a step-up to a starshippy kind of thing. I was glad to see John De Lancie back, and they even infected him with a symbiote briefly… though they pulled an Alien and shoved him out the airlock.

Paradise Lost was a great Maybourne episode, though the transition where the audience is supposed to figure out that Jack is being affected by a poison wasn’t that great. On the other hand, he got to shoot Maybourne, finally. He’s somehow going to be given a planet refuge by the Tok’ra… I suspect he will be back.

OK, not everything was great. No thanks on the “Unnatural Selection” episode with the Replicators, though sneakily they threw in BSG’s (And Dollhouse’s) Tahmoh Penikett. GEEZ. Anyway, a good play where they played on the “humanity” of the non-human, though I didn’t like how they had to spell it out at the end, and I just don’t like the Replicators. They’re worse than Apophis. “Sight Unseen” was also a little eh for me with the invisible creatures living on the different plane of existence… yet still able to interact with ours… meh. “Smoke and Mirrors” was an ok episode, though only because Teal’c got a good clothesline hit in. “Allegiance” seemed to be an unnecessary episode to show the Jaffa and the Tok’ra are on the same side as the humans in hating the Goa’uld besides being a murder-she-wrote. “Metamorphosis” was really just a lead-in to “Prophecy” to show Nirrti’s been messing with people’s DNA and Jonas might have some special powers.


Oh, and “Disclosure” was a clip show. Need I say more?

I do look forward to next season with Daniel back (probably) and I hope they don’t kill off Jonas.