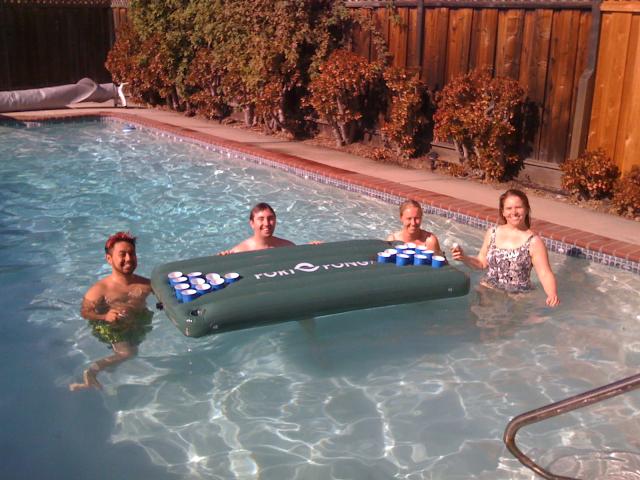 The end of the swim season is upon us. Temperatures have been slowly trending downwards, but we needed to have one last hurrah, and oh, what a party we had.

Our friends from Norway Cordelia and Jørgen perennially can’t come to our parties; being in Norway and all makes for a long drive, so we excuse them. This time around they got us a stand-in — an inflatable, floating beer-pong table!

Ted, Hannah, Julie and I had a fine time trying not to drink Natural Light beer. It was a hard fought battle, including a double for each side along with a double in a single cup! In the end, however, Ted’s was the winning shot, although at that point we were all a little chilly and there was sudden death at that point having reduced each side to a single cup. Amanda stayed out of the pool and helped with photography and was definitely warmer for it. Yay, pool beer pong!

You read that right. With the leftover coals pushed into a small pile to re-warm them, we threw some twinkies on and browned all sides making the outside somewhat toasted and the inside warm and gooey. This was suggested to us (and to everyone in the audience) by the band Nada Surf at the last show we saw, so I gave it a go. An early warning sign should have been the weirdly plastic-smell emitted by the burning of the filling as it dripped on the coals through the grate. Even still, it was surprisingly tasty. 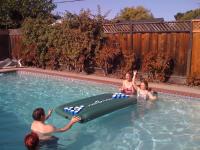