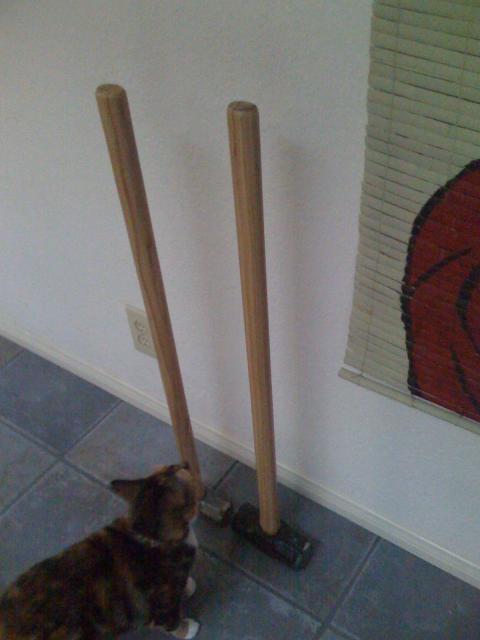 I call it “sledging” but in deference to where I found it, I’ll call it shovelglove today.

It is, bar none, the best workout I’ve ever gotten into.

I’ve had a fair amount of bad luck with working out in any dedicated fashion. I will stick on it for a little while, but it will never really stick, and I’ll lose interest within a couple times of trying it. I’ve had a couple gym memberships, have some free weights, a bike, a long distance skateboard (seriously), balance ball, kettlebells, xbox Yourself Fitness, and even a wii fit. Still, I would start with a lot of enthusiasm, but it’d run out pretty quickly because I would never build the habit. I always thought of the exercise as arduous or requiring a lot of prep or equipment or downtime or some other excuse. Usually the excuse would be that it just wasn’t fun to do the exercise after a while. Also the progress always felt so short-lived. I understand that feeling of being pumped up after lifting weights, for example, and after an hour or so it’d be gone, but it seemed like after a week (or 4) of regular weights I just never felt like anything was happening.

Until Shovelglove. Now I can exercise only 14 minutes a day and feel great! (cue infomercial music)

OK, ok… ridiculous. Seriously, I found shovelglove on a post about minimalist exercise on Lifehacker. Lifehacker is one of those websites that gives you little tidbits of possible ways to improve how you live and work. Sometimes the advice is not aimed at me, but something caught my eye in this article. The major thing was “functional exercise” — exercise based on movements and actions that are akin to manual labor. The theory is, our forefathers were fit without going to the gym, so there must be something to it.

Intrigued, I checked it out, and the Shovelglove site is great. It tells the story of development, motivations, has videos of how, and some analysis on why. Also there’s a forum for discussing movements, routines, and effectiveness.

I do a routine of motions mimicking shoveling, splitting wood, hammering down a door, stoking a boiler, and er… a few variations of lifting things over my head and arm curls. This is done in an interval fashion with a low number of reps — once I finish the movements, I move to the next one; once all the movements are done I repeat the whole routine. The short intervals keep my heart rate up, and they also mean my muscles don’t get excessively worked at any time because some muscles will rest during certain movements. All the motions involve multiple muscle groups at once, which I think makes for a more balanced workout rather than isolating specific muscles.

It’s a really fun workout. It’s not repetitive at all. My favorite motion is the splitting wood motion. It’s done like a swiss-clock automaton striking down and drawing back quickly to bring it down again. I like to put all my negativity into the target zone and smash it away. In the forum people have discussed scenarios of workouts to make it more interesting. For example, shoveling is first because you will plant trees, trees that will be chopped down, the trees are further chopped up for transport, raised up into the railroad car, and shoved into the engine for fuel. Ok, so that doesn’t make sense exactly, but that’s the progression I use, so that’s my justification. Another fun one to use is fighting orcs ala Lord of the Rings. You chop down wood to make a barricade, you defend the tower, you smite the orc… BAM!

Aside from being a fun workout, it’s short. I end up doing 14 minutes a day. The justification for 14 minutes is that 15 minutes is the minimum increment in any time-keeping program like Outlook or whatever, so this workout is essentially invisible and you have no excuse to do it. Despite it being short, I end up doing a lot of reps. I figured it out that I do 7 movements each side in my routine, so 14 total per routine. I do 7 reps per movement, so that’s 98 reps per interval. I usually will end up doing about 6 intervals, so that’s almost 600 reps! Wow! Much better than my piddly 25-lifts of every weight machine down the row at 24-hour fitness.

Also, I look hella manly with my shirt off swinging a sledgehammer. Just ask Julie.

I could feel toning and renewed energy from day one. I decided I’d do my workout in the morning since I always wake up much too early. Carving 14 minutes out of that time was an easy decision. After shovelglove, I feel like Superman and I walk into the office with a big smile on my face.

The main thing for me was forming the habit of exercise. Because shovelglove is so rewarding so quickly it made it easy for me to keep the habit up. I fully expect to keep working out with this every day. I will be updating progress here as a means to keep me in line. Mark my words and be sure to call me out if I fail.

Here’s a pic of my cat helping me choose from my initial 6-pound sledge to the new 8-pounder. I tried a 10-pounder at Julie’s Mother’s house and I did a full interval and was wiped out. Maybe next year. 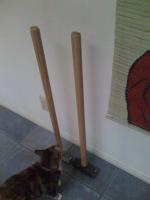